This product is already a blast from the past. In 2023 my students cannot get their head around the fact that you would need an “ipod” (did not dare mention a Walkman!) when the “iphone” does the job for you. How times change and the rate of obsolescence is rather alarming. However great design will always be great design and indeed, you could ask your students to point out how the evolution of products such as the ipod led to the iphones they now own.

Analysing the most current products is essential within design education but so is knowing your past – looking back does not hurt and, depending on your age as the teacher, may provide a little walk down memory lane.

With this in mind I have chosen this early Apple ipod Nano/Shuffle design for a back in time ACCESSFM analysis. For this piece, I am not going to consider the earphones or charger. The earphones supplied were in no way unique or different from a great number of items offered at the time.

The charger almost deserves an ACCESSFM of its own but would possibly over complicate the analysis of the Shuffle itself.

Aesthetics: I adore the appearance of the Apple range of products from this period. There were a plethora of iPods available but all were different and yet retained that core identity, the defining aesthetic of the company. The Shuffle was not as tactile as some iPods, it did not have that smooth almost pebble like feel and texture. However it did look unique and in a market full of products that almost immediately appeared dated and in some cases more like USB’s, it represented a fresh approach. The use of different colours was inspired. The product’s form closely follows its function and retains that classic, original Apple circular interface. Its appearance is iconic and very much of its time

Cost: Well this one is debatable and dependent on when you read this. The shuffle, like many other Apple products had come down in price overtime. The standard 1GB shuffle costs around £30.00 in the early 2000’s – circa £50.00 when adjusted for inflation today. I think this represented fantastic value; you got a product that functioned fantastically with great sound quality and also, most importantly, got the association with the company, the cool factor – its mattered back then, there were limited Apple products and no Apple stores. You could of bought a 1GB MP3 player for far less, but would you want to have clipped it onto your new North Face jacket and show if off like a designer label? 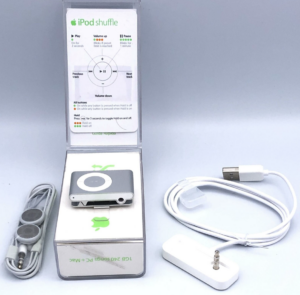 Customer: Difficult, who is the customer these days, I believe it’s changed. If you studied the famous ads they were people who like to dance around all the time, really happy people who only exist in shadows! But in real life?  Everyone I reckon, the iPod has became a product as universal as Levi jeans but in some cases cheaper, in a better range of colours and best of all you could not get skinny fit Shuffle’s.

Environment: Very important factor this one and key to the success of the iPod range as a whole, let alone the Shuffle. The Shuffle’s environment is in the users hand or clipped on an item of clothing or shoulder bag. The product needed to be splash proof and impervious to a light shower, as in rain shower. It needed to be shock proof when dropped from 5 feet. But just as importantly it needed to stand out when in use, this was no shrinking violet and as much a style statement as a product in its own right.

Safety: Always judge a product during normal use, define “normal use” and consider any obvious dangers or concerns. The product was normally used when clipped on, the clip operates by way of a lightly loaded spring mechanism with two “teeth” that are softly shaped, no matter how hard you try they do not cause any harm to the user. The case or body of the unit was lightly rounded and the shuffle could be held firmly in the hand and cause no abrasion. There was so little electricity used to power the product that its presence was of no concern.

Size: Wow, it was small, really small and quite cute with it. Even its operating switches and dial were tiny. I described it earlier almost as a designer label; well some designers have bigger labels than this. The Shuffle measures in at a height of 27 mm, width 41mm and depth including the clip of just 10.5 mm.  The size is one of its defining and most noticeable features and no doubt a customers deciding factor when thinking about how and where they were going to use their iPod. 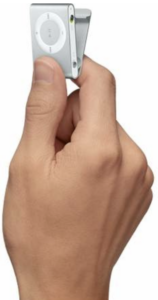 Function: 1GB so the shuffle stored between 250 and 500 tracks. The shuffle was powered via the jack socket which was not only used to attach the earphones but also to download from the USB connector on the charger. The shuffle used the superb round interface common on all iPods prior to the “touch” format. The Shuffle had two tiny aluminium switches on the bottom of the product, one to turn it on and off and a second to initiate the shuffle function. The switches themselves were a joy to use and almost comedic in their brevity. A big minus was the lack of a screen which meant going through the tracks by ear, which could take some time. 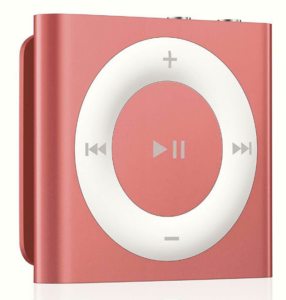 Material: The main body of the Shuffle was constructed using extruded aluminium which was then coloured using a durable anodised finished. One advantage of using the aluminium is the fact that it is very light but unfortunately over time it can dent or mark quite easily. The plastic parts were always presented in brilliant white and were no doubt injection moulded from possibly polycarbonate, however no manufacturing scars were evident anywhere on the product and as a result it retained a flawless feel to the product. Over time the white finish did not diminish as you would expect and stayed bright and attractive.